Undeniably, Jacquees is preparing for a new season of his career. Years ago, he took social media by storm with his “King of R&B” declarations that caused quite a few conversations. However, Jacquees is more than just a viral moment or the subject of a hot take. The 28-year-old R&B crooner has been active in the industry for over a decade, and now, he’s back with a new album, Sincerely For You. The project not only hosts a look from Future, but the rapper also holds the title of executive producer.

Aside from Jacquees partnering with his fellow Georgia native, the star-studded cast of features are also standouts. Summer Walker, 6LACK, Tory Lanez, John P. Kee, and Dreezy help round out a project that Jacquees is hoping that is ushering in a new chapter of his life.

“It’s all grown-man vibes. I’m 28 years old now,” he told HNHH exclusively for our 12 Days of Christmas series. “So, the conversations are just different for everything, for me. Even the lifestyle.

You know, you get older, you know, you stop doing a lot of the things that you was doing before. I feel like that’s kind of how I did it with my lifestyle and my music. And I believe that through records, you’ll be able to tell the growth into maturity.“

In 2019, Jacquees delivered two projects: his sophomore studio album, King of R&B, and his holiday offering, Christmas in Decatur. The Cash Money and Republic Records star also gave us a mixtape in 2020 amid the pandemic. His new singles “Tipsy” and “Still That” certainly place the hitmaker’s talents on display, and it’s evident that Jacquees is authentically evolving in an ever-changing entertainment industry.

As he celebrates the arrival of Sincerely For You, Jacquees took a few minutes to chat with us about the album, a few holiday traditions, leading from the heart, and wanting to lock in a few award wins in 2023.

This interview has been slightly edited for clarity.

HNHH: Thank you so much for taking the time to talk with us today. It feels like you’ve been laying low, and now you’re back with a new record. Tell us about Sincerely For You and what fans can expect.

It has definitely been a minute. I ain’t dropped an album since, I think like, 2019. Sincerely For You, this my third album, executive produced by Future, of course. The process was crazy. We been working on it for like a year, over a year. We started on it last year in Miami. It’s just been a cool process. I got some dope producers on there.

I’m just bringing the sound that I know everybody wanna hear from me. I gave them a preview with “Tipsy” and “Still That.” It’s a lot more records to come that’s just gon’ be crazy. I know everybody gon’ love these records ‘cause I already know what my fans expect from me. So, I feel like I’m finna give them just that.

It’s interesting because Sincerely For You hosts features from 21 Savage, Tory Lanez, Summer Walker, Future… But you decided to lead with singles where you stand alone. Many artists often push a record with a featured track first. What were your thoughts on doing the opposite this time around?

I feel like features are cool, but I always feel like my fans, they always want me. You know what I’m sayin’? Of course, with features, it always helps because we collab fan bases, but a lot of the times, a lot of my stand-alone records be some of my best records. I just want the people to know, you know, I can do it alone.

But of course, I got some records, some features that’s crazy. We gon’ push them up through there [laughs]. But, for the most part, I really wanted to put those records out first because I feel like it’ll give people a good feel for the album and what to expect.

I read that this was a “new chapter” for you. What does that mean for you professionally as you usher in this new era?

It’s all grown-man vibes. I’m 28 years old now. I was 24, 25, when I dropped my last album. So, the conversations are just different for everything, for me. Even the lifestyle.

You know, you get older, you know, you stop doing a lot of the things that you was doing before. I feel like that’s kind of how I did it with my lifestyle and my music. And I believe that through records, you’ll be able to tell the growth into maturity.

Most definitely. Personal evolution and maturation can’t help but spill over into your professional life—if you’re dedicated to the growth.

Let’s shift gears to the holidays. We’re in the thick of things with family dinners, trimming trees, and all the feel-good moments of the season. What traditions do you do with your loved ones this time of year?

For the most part, a lot of times lately, we always go to like, Disney World for Christmas. We’ve been doing that lately. Going down to Orlando, celebrating at Disney World, just doing stuff like that.

That’s sweet! I need those cheese grits [laughs]. And during this time, people are casting visions for 2023. I stopped resolutions and instead try to learn something new for the year. Are there any resolutions or goals that you have for 2023?

I feel like everybody always says the same sh*t [laughs]. But for me, every year, I’m trying to be a better person, a better artist, a better human being, period. So, I think for me next year, my New Year’s resolution, besides all that, I just want to get some awards. I think that’s something that I’m trying to work hard toward. Get some awards, some recognition for my hard work. That’s something I look forward to.

Read More: Jacquees Croons Through “Not Jus Anybody” Ft. Future

Definitely deserved. This is my last question, I ask everyone I interview. In the illusion that is the industry, people have expectations of who they think Jacquees is. The veil of celebrity often causes people to perceive artists in a certain way that’s not always a true reflection of who they are. What is something about the heart of Jacquees as a person that doesn’t always translate because people can’t see beyond who they think you are as a celebrity?

I don’t think people see how big my heart is. Of course, they see everything I say, you know, this and that, but I don’t think people really just see, like, the truth. The real me. I feel like, if they did, I’d get a lot more love. But that’s what I’m trying to show people now. Hopefully, they’ll see it.

But I feel like that’s something that people don’t really see a lot of me like…my heart is huge. Like, I do so much. Just off the strength of my heart, you know? But I feel like people will eventually see.

I appreciate that so much. Thank you so much for the time. Have a wonderful holiday season, and Happy New Year!

Thank you. And you, too! And make sure to get Sincerely For You on December 16th [laughs]!

Stream Jacquees’ latest album, Sincerely For You, below and let us know your thoughts in the comments.

COVID-19 is about to explode in China. What that could mean for the United States. 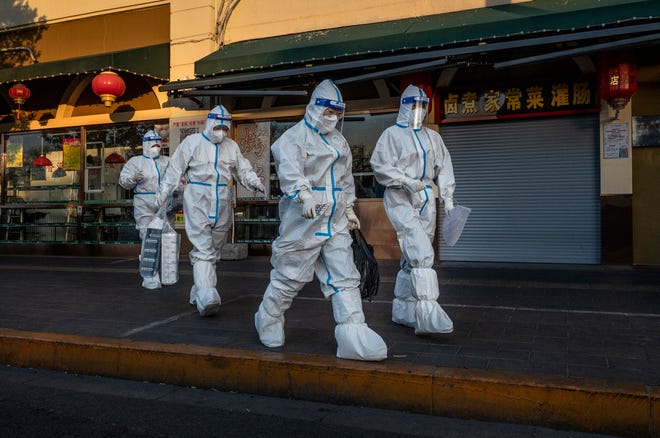